What is Native Mobile Marketing?

Home » What is Native Mobile Marketing?

It is a form of advertising that is native to the mobile platform. That is, it takes advantage of the unique features of the mobile device, such as the small screen size and touch interface, to deliver an experience that is more native to the user than traditional web-based advertising.

Native mobile advertising can take many different forms, but one common example is an ad that appears in the same format as other content on a mobile app. For example, a native ad on a weather app might look like a normal forecast but include an advertiser’s logo or product information.

It is a form of mobile advertising that is designed to blend in with the surrounding content. Unlike traditional banner ads, native ads are less intrusive and more likely to be clicked on by users. Native ads are typically displayed as sponsored stories or recommended articles, and they often include an image or video. In order to be effective, native ads must be well-written and relevant to the interests of the audience. When done correctly, native advertising can be an effective way to reach mobile users.

Why Use Native Mobile Advertising? 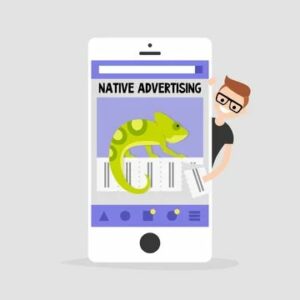 It takes advantage of the native features of the device, such as the touchscreen and GPS, to provide a more immersive and interactive experience for users. Native mobile advertising can take many different forms, including banner ads, video ads, and even native app ads.

This means that advertisers can be sure that their ad will be seen by people who are most likely to be interested in their product or service. In addition, native mobile ads can be customized to fit the specific needs and interests of the target audience.

For example, if a company wants to target women with its ad campaign, it can customize the ad so that it appears on websites and apps that are frequented by women. native mobile advertising is an effective way to reach potential customers with your product or service.

What Are Targeted Ads?

Targeted ads are a type of mobile advertising that allows businesses to target specific demographics with ads tailored to their interests. Targeted ads can be served through mobile apps or mobile websites, and they can be targeted to users based on their location, age, gender, interests, or other factors.

One of the benefits of targeted ads is that they can be highly effective in reaching the right audience. Another benefit is that they can be less expensive than other forms of mobile advertising, such as banner ads. However, some users may find targeted ads to be intrusive or annoying. Use these ads sparingly ensuring they are part of the user’s interests.

Targeted ads are a form of mobile advertising that allows businesses to deliver highly personalized messages to potential customers. Unlike traditional ads, which are generally broad in nature and reach a wide audience, targeted ads are specifically designed to reach a particular target market. As a result, they tend to be much more effective in terms of both engagement and conversions.

There are several key advantages of targeted ads.

Overall, targeted ads offer a number of significant advantages over traditional advertising methods, businesses that are looking to maximize their advertising ROI would be wise to give them a try.

Native mobile advertising is one of the most effective ways to reach consumers on their mobile devices. Not only are native ads highly visible and engaging, but they also offer a great return on investment (ROI).

In fact, native ads outperform other types of mobile advertising, such as banner ads, by a wide margin. On average, native ads have a click-through rate (CTR) that is nearly three times higher than banner ads.

1. In-feed ads are native ads that appear in the main feed of a social media platform or app, such as Facebook or Instagram. Users interact with these Ads because they are in the same format as other original posts that the users interact with.

2. Sponsored stories are another type of native ad that appears on social media platforms. These ads feature user-generated content, such as reviews or testimonials, that has been endorsed by the advertiser.

3. Native ads are ads that are integrated into the user’s interface. For example, Facebook allows brands to place video ads in between users’ newsfeeds. Native video ads are less disruptive than pre-roll or mid-roll commercials, and they can be more engaging for viewers.